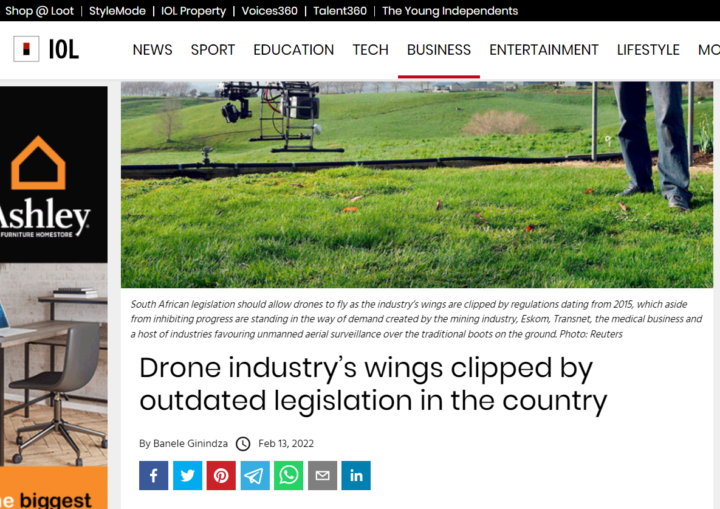 SOUTH African legislation should allow drones to fly as the industry’s wings are clipped by regulations dating from 2015, which aside from inhibiting progress are standing in the way of demand created by the mining industry, Eskom, Transnet, the medical business and a host of industries favouring unmanned aerial surveillance over the traditional boots on the ground.

Industry experts have told Business Report the current regulatory environment to a greater extent does not support the rate of growth of the industry while across the globe, the biggest challenge regulators have been battling with is finding the perfect regulatory balance between “under regulation”, and “over regulation”.

“Even though this is not a problem unique to South Africa, we could be doing better. We were the first country in the world to promulgate comprehensive drone regulations, and we lost the opportunity to sustain that by continuing to innovate and stay ahead of the curve,” Sam Twala, a director of Ntsu Aviation, said this week.

Kim James, a director at UAV Aerial Works said current RPAS regulations in South Africa could be described as “restrictive, difficult to navigate and expensive to comply with”.

“The restrictive nature describes the fact that no matter what size of drone and what application an operator uses it for or where, the operator is required to have an Air Services License from the Department of Transport; go through a five-phase ROC (remote operator certificate) application process; and have appointed post holders in their organisation or in a consulting capacity to cover six posts. The control and governance required to keep ROCs (renewed on an annual basis) is costly and arduous,” James said.

For security operations, the sector has a lot of red tape to overcome in order to use unmanned aerial vehicles (UAVs), including obtaining landowner permissions, municipality permissions, and only flying within certain areas, etc.

UAVs provide a safer environment for security officers, act as a force multiplier and shorten response times as they are an added layer of defence to

systems already in place. Drone Guards, which provides drone security and surveillance services is one company that has managed to successfully work its way through legislative red tape and is licensed to fly at night, over people and property in controlled airspace. Industry players said the South African Civil Aviation Authority (Sacaa) should carefully consider its approach to the future regulation of UAVs, as the security sector is one of many industries that benefits greatly from this aerial tool.

James said there were only 87 registered ROCs (currently as per the SACAA website), with a few operators allowing others to work with them under their ROCs in six years which is not great. It also means that running an ROC is expensive relating to the cost that gets charged to the end client is most likely higher than it should be. South Africa is price sensitive, and many industries cannot afford drone services.

“There is more supply than demand, meaning that in general the market (end user) still has not adopted drone technology as part of its workflow. There are more pilots than required at this point. The requirements of these larger SOEs is of such a nature that only a select few ROCs can actually deliver these projects. Resources, technical know-how and certifications determine that larger, more experienced ROCs can deliver these,” James said.

Twala said the last important ingredient is the political will and better collaboration between crucial stakeholders in the government. The current “lack” of cooperation between government stakeholders might be attributed to the lack of “drone” policy. “We have to start from the beginning and get the basics right. That means reviewing the current regulations, and for the CAA to optimise internal approval processes. The number one pain is to deal with “over and under regulation”.

“Second, as our country, we need to make headway as far as airspace integration is concerned. The access to airspace for drones remains a serious challenge. The other important role player in the equation is spectrum allocation for drones,” he said.

He said drone technology offered unparalleled advantages compared to the traditional way of doing things. The use of drones and applications are so vast, hence the adoption of this technology continues to grow exponentially.

“Among others, this would include government departments such as public order policing, search-and-rescue services, and medical deliveries,” Twala said.

Industry experts agree that utilising UAVs in security operations is a form of visible policing, and it acts as a deterrent. Drone Guards UAVs monitor suspects, provide actionable data to security officers and reveal entry/exit points at protected sites.

The mining sector has shown a lot of interest in utilising UAVs for this purpose, as mining sites across Africa continue to be a point of conflict, often involving criminals and shootouts.

James said although linked to legislation, there was a need to develop the design and manufacturing space.

“Most ROCs use imported Chinese enterprise drones. There are many reasons why this is convenient, but there should be local manufacturing capacity once the demand grows,” she said.